Prayer of Favors is a scroll (an ingredient) that will help you create the best health potion of Knight Online which is called Water of Favors. For using this item you need to be level 60 priest and you need to learn priest healing skills fully. Otherwise you won’t able to create potions with another class nor other priest skills. There are also other prayer scrolls as Love, Grace and Life. However favors is the best prayer scroll. You will able to create 720 health recovery potion with these scrolls. You can earn good amount of coins with these potions. If you would like to sell these potions, it’s recommended to create merchant near of a potion seller. 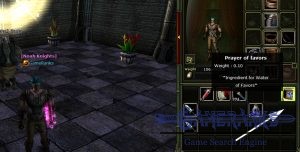 What is Effect of Prayer of Favors Scroll

No effect on individuals at all. Prayer of Favors is an ingredient for creating 720 hp recovery potion.

What is Price of Prayer of Favors

Prayer of Favors is the best prayer scroll and it is the most expensive one.

You can buy these scrolls from sundries at most of places. Generally players don’t sell these items through player merchants.

Where to Find Prayer of Favors? Which Monsters Drop It?

You can buy these scrolls from any sundries at cities and towns. It is not very expensive. Any monsters can drop these items, however drop rate is not very high though.