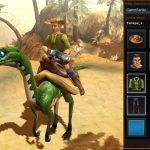 Online
44th
Adventure
6th
Dinosaur
2nd
WindowsOS
40th
Do you think this game deserves a better placement in rankings or it should be worse? You can change it! Game Ranks is based on user votes. Vote for the game and help us to determine better or worse placement for the game.
Click Here to Vote
Dino Storm is a good adventure game that you can play with a client in your computer. Graphics of the game is quite attractive. However the game is working with client, if you want to play this game on browser, you won’t able to do it. You can download the client from main page of the game. The game has been released in 2012 and it has been updated several times. This is one of those games which you won’t need to pay for getting much stronger. You can go quite further in the game with a free account.


Share your experiences with the game with other users and add your review on Dino Storm.

Dino Storm is a good adventure game that will drive you to ancient times of the world. Account creation is easy in the game. You need to download client program from the main page of the game and then you will need to create a new account on the client. After you registered to the game, you can set your character that how he/she looks like… You will also select the color of your dinosaur which you will ride. There are no classes in Dino Storm. So you shouldn’t worry about class pick. You can play the whole game with the mouse, however you will need a little bit help of keyboard at times. Especially when you need abilities of your Dinosaur and drinking HP recovery potions. There is a quest tracker of the game, you can use it for levelling up faster in Dino Storm. You will also learn how to play the game with it. You can attack your target with clicking on it. You will see the “Attack” button after you click on target. You will attack to the target with your gun from the range. When target comes to you closer, you can use the dinosaur melee skill. Footprints will help you to find location of the quest and quest giving people in the game. You can also ask for help from other users on the chat window. You can do it on international chat window. There are also chat windows in many languages on Dino Storm such as Italian, Bulgarian, Hungarian, Greek, Turkish, Portuguese, Polish, German, English, Spanish and French.

Please don’t full screen the game without changing resolution of the game from settings. Otherwise graphics will not be attractive for you.