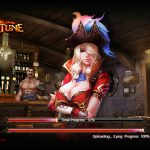 Online
308th
Adventure
41st
Android
55th
Browser
116th
Fantasy
182nd
iOS
53rd
WindowsOS
226th
Do you think this game deserves a better placement in rankings or it should be worse? You can change it! Game Ranks is based on user votes. Vote for the game and help us to determine better or worse placement for the game.
Click Here to Vote
Wartune is an adventure game that you will able to play free. The game has been released in 2012. The game has good concept with a poor storyline. However the game is an adventure game more than a RPG or MMORPG. If you would like to play an online Adventure game, you can give a try to Wartune.
Add Your Review for Wartune.

You can select three classes in the game. You can be an Archer, a Mage or a Knight. You can pick one of these classes and follow the tutorial quests. They will help you much for understand the concept of the game and they will also help you about the gameplay. You can get some paid items freely in the game, however that won’t effect your character’s strength much. The game is easy to play and you don’t need to control your heroes as same as League of Angels II. It has a similar concept but you are playing this game in a map and there are some campaigns in the game. Each campaigns will get harder after you level up. You can also find some items and golds while you are walking on the map of the game. That is a little bit exciting.