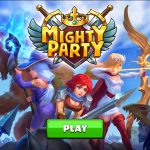 Online
248th
Card
9th
Browser
85th
Facebook
47th
Fantasy
148th
Turn-Based
26th
Do you think this game deserves a better placement in rankings or it should be worse? You can change it! Game Ranks is based on user votes. Vote for the game and help us to determine better or worse placement for the game.
Click Here to Vote
Mighty Party is a Card Fantasy Role-Playing game where you can play on Kongregate, Steam, Facebook and Armor Games. It is an easy game and it has similar concept with other card games. If you have interested with card games before you will able to play it easily.

The game will start with tutorial battles. You can learn a little bit strategy with this tutorial battles at the beginning. So we recommend you to take a look at classes of your cards and their skills. There are generally anti-skills of defensive and attacking skills of your opponent. You can make a good strategy if you figure out these skills and card classes. They key factor in the game is killing the hero of the opponent. You can be weaker than your opponent, however with a correct strategy you can kill hero of your opponent and you can win the game. You can also follow the tutorial of the game for levelling up faster and understand the other features of the game. There are multiple kind of battles and you will need to have an idea about these battle types. Because you will get many free items from events, battles and promotions of Mighty Party. You should also be careful about tracking level of your cards. After you pass some stages on the game, you will need stronger cards and you won’t get any notification that you can level up a card on the game. You will need to follow it yourself and level up your cards to strengthen them.