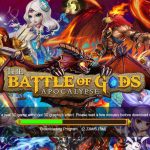 Online
267th
MMORPG
109th
Android
44th
Browser
93rd
Facebook
50th
Fantasy
158th
Mythology
9th
Tactical
62nd
WindowsOS
204th
Do you think this game deserves a better placement in rankings or it should be worse? You can change it! Game Ranks is based on user votes. Vote for the game and help us to determine better or worse placement for the game.
Click Here to Vote
Battle of Gods is a Mythological MMORPG that you can play with Norse (Scandinavian), Greek, Egypt, Hindu, Vietnamese, Mayan and Chinese gods. There are also angels from current religions and creatures from mythologies on the game. You can play Battle of Gods on Facebook, FB Gameroom, Android. The game is free to play.

Battle of Gods is a nice MMORPG with a unique concept. You need to level up on the game for unlock all features of the game. You can also join PvP actions after 30 level. If you would like to level faster on the game, we recommend you to complete the areas on  War Zone. You will get rewards from the War Zone and you will able to level up your heroes there. It is the only way for fast levelling.

There are a few things important for you on the game. These things are levelling up your Gods (heroes) on the game and care for their equipment. Whenever you receive a suitable equipment for one of your heroes, a red point will appear on “Gods” button. Click on Gods button and then make your god wear the gear. When the god has full equipment, you will able to upgrade him and all equipment will disappear. Don’t worry, upgrading a god is better than his/her equipment set.

You can watch the gameplay video of Battle of Gods: Apocalypse below:

The official trailer of Battle of Gods by ShenZhen IYouLong: