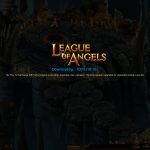 Play on Web
Play on Windows

Online
341st
Facebook
71st
Fantasy
204th
WindowsOS
244th
Browser
137th
Do you think this game deserves a better placement in rankings or it should be worse? You can change it! Game Ranks is based on user votes. Vote for the game and help us to determine better or worse placement for the game.
Click Here to Vote

The game has a good tutorial at the beginning of the game which will make you learn about League of Angels. You will able to unlock features of the game with levelling up. There are many missions and quests you can get on the game and it will keep you busy for some time. Quest tracker at the right side of game screen will help you a lot about levelling and getting the quests in the game. You can upgrade your weapons and armors in Forge in the game. You will able to create an army for yourself and you will able to destroy your enemies with skills of these armies. Angels are also very important for your army on the game. They are providing support more than being warrior but their skills will be quite important for you. There are also many good prizes for you if you stay online at the game. You can also gain gifts from quiz on the game. There are many social questions on quiz about the world. You can level up quite fast in the game and you will able to unlock many skills very soon.

The downside of the game is that you can not control your team at all. When you enter the battlefield, everything goes automatically and you can not build any strategy for beating your enemies. It seems only strategy of the game building a strong battle squad.4