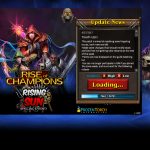 Online
174th
MMORPG
65th
Browser
50th
Facebook
31st
Fantasy
104th
Do you think this game deserves a better placement in rankings or it should be worse? You can change it! Game Ranks is based on user votes. Vote for the game and help us to determine better or worse placement for the game.
Click Here to Vote
Rise of Champions is a good MMORPG that you can play on browser. You can play the game on platforms like Facebook, official website, Kongregate, Armour Games.


Click here to review Rise of Champions and share your thoughts about the game with other players.

You can select three classes on the game. Classes are mage, warrior and rogue. Mages are range fighters who have learned studies of the arcane. Warriors are defensive fighters with melee skills. Rogues are melee and range individuals. You can use them as an assassin and also an archer. Assassins are not defensive but makes significant damage against their opponents. Archers are rangers like mages who are using bows and arrows. after you select your class you will begin to the game with a tutorial battle. You will able to understand how to use your skills in the game. You can select multiple skills in the game and you can use them against your opponents. If you have levelled in the game, you will able to give a skill point. Some of these skills will able to help you to stun, ablaze or freeze your enemies. Some items have some elemental damage too. You will also get 3 stat points in the game for each level you get. You can give these points to Strength, Agility, Willpower, Magic and Constitution.

If you are a mage, your main stat will be Magic. Secondary and third skills will be willpower and constitution for you.

After you reach level 5 or higher, you will start to face with players on the game.