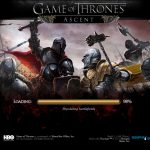 Play on Web
Play on Android

Online
143rd
Strategy
14th
Android
23rd
Facebook
23rd
iOS
23rd
Browser
36th
Fantasy
85th
Do you think this game deserves a better placement in rankings or it should be worse? You can change it! Game Ranks is based on user votes. Vote for the game and help us to determine better or worse placement for the game.
Click Here to Vote
Game of Thrones Ascent is a good strategy game that you can play in the world which has been created by Gorge R.R. Martin. The game has many users from different countries of the world. You can communicate with these people, build houses in the game and you can fight against other houses or groups in the game. The game’s scenarios is following the scenario in TV Shows, so you won’t able to see the same scenario in the books. There are many items on the game which you can use and you can combine these items with some items to create better weapons. You can have dragons and you can try conquer Westeros with them. The game is not hard to play and you will enjoy while you are playing it.


When you play the game of thrones, you win or you die. There is no middle ground.

Game of Thrones Ascent has a flash based game which has many good features. You will able to play this game on your Facebook Account, Android phones, in your Chrome Browser or your iPhone. The game has always similar scenario if you even pick Starks, Lannisters, Tullys, Arryns or any other great houses. So this make the story of the game not exciting. You can strengthen your character in the game with rebirth option, however you will need to play the whole game from the beginning with similar scenario. Specific scenarios for each Great Houses could be great. The game has a tutorial at the beginning stage and it will help you a lot for learning how to play the game. Just follow introductions. You need to make a good strategy while you are picking your family and your sworn swords. Otherwise you won’t able to succeed at events, wars and quests. You need to make a good strategy while you are creating your buildings to your fortress too. You can always be out of stones, fruits, etc.  That will damage speed of your production. You can do quests faster if you produce some breads. There are also items which will make your production faster. Adventure parties will help you to get various items to help your production Each families have different features in the game. We are going to tell you about these features to you at incoming posts about Game of Ascent. The game has good graphics for a flash game and the concept of the game is awesome. However it could be a better game with a good story of Game of Thrones.