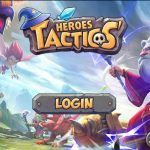 Online
208th
Strategy
25th
Android
32nd
Browser
65th
Facebook
38th
Fantasy
126th
iOS
33rd
Tactical
44th
Do you think this game deserves a better placement in rankings or it should be worse? You can change it! Game Ranks is based on user votes. Vote for the game and help us to determine better or worse placement for the game.
Click Here to Vote
Heroes Tactics is a strategy game that you can play on Facebook and Kongregate. The game has average graphics and it has unique concept. You will enjoy while you are playing Heroes Tactics.


Do you like or dislike Heroes Tactics? Review and vote it now ans share your experience with other gamers.

You will need to download Heroes Tactics for playing on Windows. You can play the game on browser with Facebook and Kongregate. You will need to gather heroes for your squad in the game and battle against other individuals on quests and battle against other users. There are many kind of heroes on the game and you need to pick the best one against your opponents and you should place them well. While we were playing the game, we have faced with loading issues several times on browser versions (Kongregate & Facebook). You will need to refresh the game if you get this problem. Please don’t forget to sever you picked at the beginning of the game. You need to complete quests for getting more heroes in the game. Completing quests will also unlock the skills. There is a good tutorial of the game about tactics and defending and attacking. Attacking is not the main skill of the game, you should learn how to manage your units to get successful in the game.