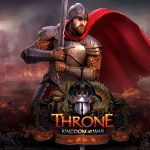 Online
81st
Strategy
8th
Android
8th
Browser
12th
Facebook
8th
iOS
7th
Medieval
8th
Do you think this game deserves a better placement in rankings or it should be worse? You can change it! Game Ranks is based on user votes. Vote for the game and help us to determine better or worse placement for the game.
Click Here to Vote
Throne: Kingdom at War is a new game of Plarium and we believe that it is quite successful online strategy game with many units. The game is providing many users for their users and it looks like other games of Plarium. The game has very similar concept with Vikings: War of Clans. However there are many kind of units in the game and it makes this game harder to play (about creating new strategies at wars). Plarium is providing more battle units with different specs with this new game for their users.


Click here to add your review for this game.

The key factor of learning how to play Throne: Kingdom at War is following quest tracker which will appear at left sidebar of your game screen. This will also help you to level up faster on the game. If you have played an online strategy game before which is based on resources, we believe that you should also know that resources are the key factor for getting stronger in the game. You need to take care of your resources buildings and you need to keep upgrade them. This will help you to gain more resources and more resources means more building upgrades and more warrior units. Since the game is quite new, you can get stronger in the game if you can take care of your account.